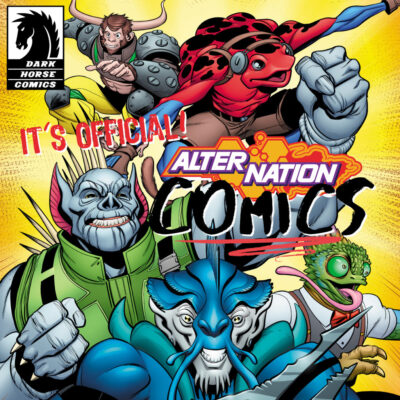 Did you hear? Dark Horse & Panda Mony Team Up!

MILWAUKIE, Ore. (October 4, 2019) – Ahead of New York Comic Con, Dark Horse Comics and Panda Mony Toys are excited to announce a new publishing partnership based on Panda Mony Toy’s line of exciting and unique human-animal hybrid figures, Alter Nation! At a top-secret island base off the California coast, these human-animal hybrids, also known as the GK Delta Special Forces, dedicate themselves to protecting humanity from forces that no typical human can defeat – and no one is allowed to know. Find out what happens when they discover that their origin isn’t what it seems and is part of a larger cover-up. On October 16, 2019, Dark Horse and Panda Mony Toys will release a 12-page digital comic preview of an upcoming graphic novel, Alter Nation: The Mystery of Whining Winny.

In Alter Nation: The Mystery of Whining Winny, the GK Delta team is the only line of defense against threats that normal humans can’t stop. Join the team as they’re dispatched to Nevada where it’s rumored that a monster is menacing locals. Have they found a new member of GK Delta? If not, they’ll be trapped between it and the townspeople they need to save. Written by Tim Seeley (Grayson, G.I. Joe: A Real American Hero), illustrated by Mike Norton (Battlepug), colored by Allen Passalaqua (Battlepug), and lettered by Crank! (Rick and Morty), Alter Nation: The Mystery of Whining Winny and the Panda Mony Toy line are sure to thrill fans!

Formed in 2017, Panda Mony Toy Brands, LLC’s goal is to become a leader in children’s entertainment through the manufacture of toys and by licensing their original character brands to film, publishing, and animation studios. Panda Mony is guided by respect for kids and embraces the freedom of childhood. Panda Mony creates new and fun entertainment brands because they believe that each generation of children deserves something of their own. Panda Mony respects a child’s intelligence, eschew indoctrination, and encourages self-discovery. The company encourages healthy physical and psychological development and time spent between kids and their guardians. Next » Ryan’s Rant #2: Won’t Somebody Think of the Children?!