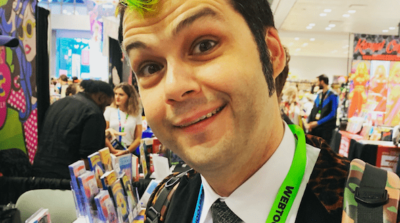 Panda Mony Toys: “It seems to me that kids aren’t respected by the entertainment industry”

The independent US outfit, Panda Mony Toys has made it its mission in recent years to shake up the action figure market, a space it believes has “become stagnant with toy companies chasing the big comic book and movie franchises” with the launch of its original IP, Alter Nation.

Earlier this month, the company made its first move in building an Alter Nation franchise model itself, with the launch of a short form animated series on YouTube. Buoyed by early success and the positive first reactions from audiences across the US, Panda Mony Toys has big hopes for its toy line on the global stage.

ToyNews catches up with Panda Mony Toys founder and CEO, Ryan Magnon to learn more about the company looking to change the industry’s mindset when it comes to action figures.

Can you give us a bit of background on Panda Mony Toys, what are you guys looking to bring to the toy space today?

I’ve had a super strong desire to bring stories and characters to life since I was a kid. When I looked at comics and animation industries, they seemed saturated with a lot of great independent productions that may or may not become breakout hits, if they can even get good distribution first. It seemed like launching a comics or animation studio was a challenge from a market differentiation perspective.

However, the opposite was happening in toys. I’ve been a toy collector since I stopped opening the boxes in 1993, with a strong focus on collecting mass market kids toys. On one of my regular trips to Toys R Us, may it rest in peace, I looked at the action figure aisle and there wasn’t a single brand that wasn’t at least 25 years old, and that’s where the idea of Panda Mony was born: original IP with great stories and characters using toys as the medium.

We got the “you can’t do that!” from a lot of people in the toy industry. Among other things, they said you can’t make an action figure without an established license, but we knew better because our team had a ton of action figures that were never comics, cartoons, or movies.

I have fond memories of Battle Beasts, Super Naturals, and the Skateboard Gang. Maybe their success was too modest for the billion-dollar companies, but it’s fine for us. We believed that if we had a great toy with great characters, the content partners would come, and they have.

You seem to be hitting a bit of a nostalgic ’90s note meets the contemporary appeal of YouTube animated shorts/storytelling methods – what drew you to this kind of hybrid?

I don’t think it wasn’t really intentional to be nostalgic. It might be a subconscious thing where we’re bringing back some of the things we liked as kids, but I also think it happened that way because action figures changed over the last few decades to become yet another chunk of merchandise to milk a popular movie or game for all it’s worth.

We take it as a compliment that people are comparing Alter Nation to toys of the ’80s and ’90s since that seems like the golden age of action figures.

That said, we do try to avoid relying too much on nostalgia as well, avoiding following what other companies do or assuming what worked in the past will always work. Instead, we talk to kids about what they’re doing and to see if there’s a toy or story component that hasn’t been done yet that they might like.

Things like launching a YouTube series was a no-brainer because kids are going away from traditional platforms for digital ones and a YouTube series and ads on YouTube are a lot more affordable than their televised counterparts.

What influenced the development of Alter Nation in this way?

My impression may be off, but it seems like kids aren’t really respected by a lot of the entertainment industry.

First of all, a lot of character design and story are toned down. Kid-appropriate, complex themes are what made a lot of our favourite franchises popular. A lot of action brands for kids look cartoony with a tone to match. I think the rationale is a fear that it’ll alienate parents or kids won’t comprehend it. We see no reason to believe either.

The other big problem is that so much of kids’ entertainment are these half-assed reboots that don’t have much heart because they’re so formulaic and uninspired. The idea is if you miss the mark with the kids, well, maybe you can still get nostalgic adults. Even if it tugs at the heartstrings of 40-year-olds, are they going to buy the toy in large numbers?  An established license carries so much baggage to service what’s familiar about the original while doing something new. The two are inherently contradictory.

It’s not surprising when so many of these reboots flop and new brands like Frozen, Fortnite, and even Five Nights at Freddy’s resonate more with kids, and it’s no surprise that more adult fans are telling Hollywood to leave their beloved franchises alone.

It seems like an established license is no more or less risky than an original one. It just comes down to a hook that’s going to resonate with the current generation. Our brands will do that by using interesting characters, quality product, and great storytelling.

If we want to talk about nostalgia, one thing I miss from the ’80s and ’90s is that people were a little more cynical and called out blatant money grabs. Nowadays there probably is a guy out there trying to make Spaceballs: The Flamethrower a real product.

What has reaction been like to Alter Nation – what audiences are you seeing the best response from?

Overwhelmingly positive. The people at Diamond Comics, who do our distribution and get a chance to see every action figure in the universe, called us up to earnestly let us know how much fun they were having playing with our figures. That meant a lot to us.

Action figure reviewers have said nothing but positive stuff about the quality and fun. What’s really special to us is getting to see the kids’ reactions though. We were at New York Comic Con and let kids play with our toys while they were waiting in line for exclusives, and they’d never seen anything like Alter Nation. They had so much fun trying to get the Daart figure to do a backflip and playing with Sham’s sticky tongue.

What do you think the future holds for Alter Nation, what can this brand bring to the toy space?

The future of Alter Nation is to expand on its merchandise and content offerings. We’ll be working with more partners to produce other quality consumer goods and stories across all mediums that are in-canon with the rest of our content.

For toys specifically, we’d like to introduce vehicles and play-sets in addition to new characters. The Alter Nation story surrounds a top-secret military experiment where heroes only know a little bit about the cover up. As they uncover more, the sky’s the limit on the type of fascinating new characters and technology that can be involved.

Are there plans in place to bring the IP to the UK?

Absolutely! Diamond Comics already sells worldwide, and we’re in business discussions with other distributors in Europe and Asia. We’d like to find partners in other parts of the world as well.