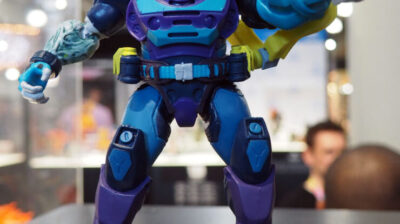 Alter Nation is a relatively new toy line by Panda Mony Toys that was created so that today’s kids have a property that’s new for them. The story behind the characters is that they are the result of secret Government testing that mixes human DNA with animal DNA creating the perfect soldiers in the GK Delta Special Forces team.

The toys in the line are roughly 6″ scale and feature quality sculpts, deco and many feature an action feature…which doesn’t interfere with the quality of the toy. As an example, Sham has a sticky tongue and articulated eyes which move with a wheel on his back and Daart can do frog-like leaps with his spring action legs.

Each figure includes a minicomic, but for those looking for deeper story telling the folks at Panda Mony Toys have partnered up with Dark Horse and have a graphic novel on deck for release this summer.

You can find the first wave of Alter Nation toys in store now (check their own online store) and look for a second wave later this year. And if you’re heading to C2E2, look for a prototype giveaway for one of these first wave figures!

This article originally appeared on awesometoyblog.com and can be read in its entirety here.