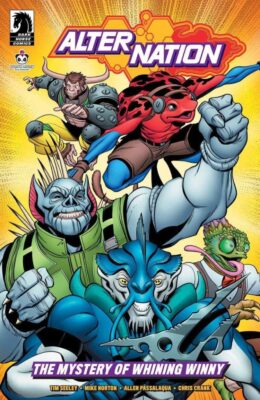 Panda Mony Toys Teams Up With Dark Horse for Alter Nation: The Mystery of the Whining Whinny Graphic Novel

Fans of Panda Mony Toys’ Alter Nation is already a hit toy line, and now the company is partnering with Dark Horse Comics for a one of a kind project that will bring Panda Mony Toys’ marquee characters to the world of graphic novels. We’ve got your exclusive first look at Dark Horse’s new graphic novel Alter Nation: The Mystery of the Whining Whinny, which features a top tier creative team that includes writer Tim Seeley, artist Mike Norton, colorist Allen Pssalaqua, and letterer Crank!. The new book will hit shelves next summer, but you can hit the next slide to get your first look.

That’s not all though, as Dark Horse is throwing in a cool surprise for Halloween and releasing a 12-page preview of the graphic novel, which you can check out right now, and means you can enjoy some of that Halloween candy with a free comic to enjoy along with it.

For those unfamiliar, Alter Nation is a toy line developed for kids and by kids and features original characters and an original narrative. Each figure also comes with its own mini-comic book, and now they’re expanding to the world of graphic novels. Here’s a rundown of the Alter Nation character lineup.

You can find the official description for Alter Nation’s narrative below.

“Off the California coast, on a top secret island base, human-animal hybrids dedicate themselves to protecting humanity from forces that no typical human can defeat while exposing the cover-up of their origin.”

Hit the next slide to check out our exclusive preview, and you can pick up Alter Nation: The Mystery of the Whining Whinny when it releases next summer.

This article was originally posted on comicbook.com on October 31, 2019.
https://comicbook.com/comics/2019/10/31/panda-mony-toys-alter-nation-the-mystery-of-the-whining-whinny/